It’s one of those moments in life when you feel totally defeated. Sometimes it makes you want to curl up in a ball in the shower and cry, no lie. This type of thing is so damn popular that they even made a show about it. The Catfish MTV show features people that have had run-ins with shady liars and scammers from all over the Internet. You should check it out if you’ve not seen it as of yet.

The good news is that you can easily avoid this type of thing if you know what to look for. Which is exactly why I’m going to share my personal thoughts on all this and how I go about detecting these types of fake people trolling the Internet daily.

But before I get started:

You need to understand that Uberhorny does not have any catfish profiles within the network. The reason they avoid this is due to the top-notch support team monitoring users. They sniff out the fakes and cancel their accounts within seconds of registering. That’s how slick this company is and how on top of things they really are. Now, back to what I was saying… 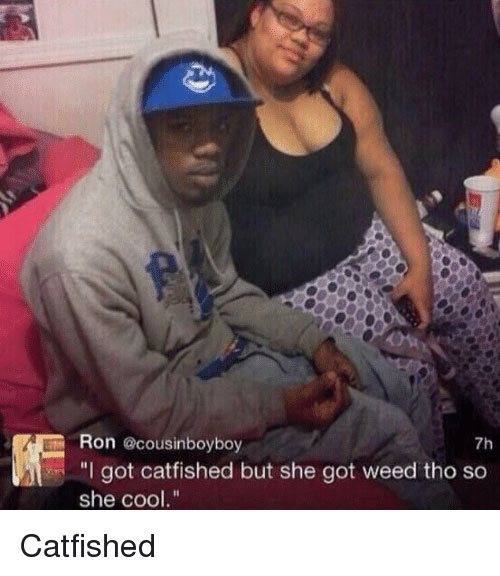 How To Avoid Getting Catfished

There are a few things that you need to be on the lookout for if you want to avoid getting catfished completely. Make no mistake about it, everyone eventually has to deal with this at one point in time or another. It’s better to know what to look for than not. Here’s what you need to know.

If It Sounds Too Good, It Probably Is

Let’s assume that you’re hung like a field mouse, you’re poor, don’t have a nice car, yet you seem to be getting all these requests from legit supermodels to connect and meet up in person. If this is the case, then it might be too good to be true. Most of the time when catfishing occurs, people use the most attractive photos they can find. They’ll do anything to get you to buy into their scam. If she looks too hot and won’t chat or meet in person, then run for the hills.

Likes Everything, No Matter What

If you come across someone online that simply likes everything and agrees with every little thing that you say and do, then chances are it’s a scam.

Most people out there today form their own opinions about things and very rarely do people agree to everything. If someone is yes-ing or me too-ing you to death then it’s likely a catfish.

They Refuse To Video Chat

If someone simply refuses to chat on video with you, then you need to assume the worst. Based on my personal experiences, those that have been catfished have completely ignored the video chat refusal and continued to send their messages to the sites. Eventually, they’ll ask for a favor or you’ll find out they are nothing but tire kickers.

When someone makes an initial contact with you, it’s in your best interest to assume the worst. 9 out of 10 times, the person getting catfished is contacted by the other person. They make the first contact to make themselves look more real and authentic. The problem is they aren’t at all. Each time some tries to contact you, just do yourself a favor and put your guard up. It’s not until you meet in person that the truth is really revealed.

Well, those simple anti-catfishing tactics should help you prevent being taken advantage of online. However, like I said earlier, should you wish to avoid this entirely, just go ahead and join Uberhorny today and you’ll never have to worry about this type of thing.