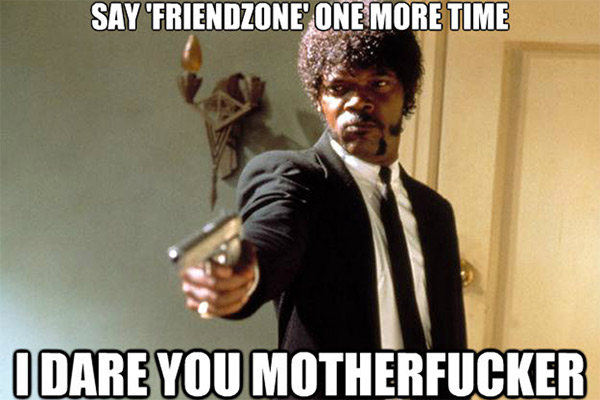 So you have a crush on a girl you know and you really want to start a relationship with her. However, You’re stuck in the friend zone. She thinks of you more as being a close friend. She intends on keeping you as a friend rather than becoming someone you can bang. This type of situation is called the friend zone and it is notoriously hard to get out of it. It absolutely sucks to be in the friend zone too. But fear not, if you are serious and determined about winning this girl over no matter what, there is a way to get out of this zone. You’ve got to pay attention and listen closely.

Follow the following tips below and make sure you are very determined to escape the friend zone or it won’t happen. So, knuckle up my friend because it’s going to be a rough ride!

Stop Being The Nice Guy
One of the biggest reasons why you are in a friend zone today is because of your friendly and nice nature towards the girl you want to fuck. Ever wonder why all the jackasses get the girls? You’re being so nice to the girl that she has started seeing you as a best friend type individual versus someone that she’d actually like to get busy with. Build up some confidence and attitude (but don’t be a dickhead) and keep the nice factor to the minimum. When she realizes that you are ignoring her, she may naturally start getting attracted to you because that’s just how most women are.

Show Her You’re Into Other Girls
Jealousy is a huge factor when it comes to women. They get jealous. I mean really fucking jealous! If you constantly tell her and show her that other chicks dig you a lot, she may start getting jealous. When she becomes jealous of your female friends, she may start seeing you differently. She may try to grab your attention more and that will likely work in your favor.

Hide Your Feelings
If you constantly tell her that you can’t imagine living without her, she may start thinking that you are desperate for her attention. This may cause her to likely start ignoring you. Stop showing her that you really want her because no one likes someone who shows they’re needy.

Take Risks, Touch HerThe problem with nice guys is that they often don’t break the barrier of touching the girl they like. If you don’t get a little physical with the girl you like, you may never be able to attract her. Don’t feel guilty that she won’t like the idea of you touching her.

The problem with nice guys is that they often don’t break the barrier of touching the girl they like. If you don’t get a little physical with the girl you like, you may never be able to attract her. Don’t feel guilty that she won’t like the idea of you touching her. You need to do it in a very casual manner. I’m not talking about groping the poor girl. But you need to be somewhat physical, or at least, try to establish a physical connection if you’re truly interested in her. Find reasons to touch her a bit here and there casually and watch how your relationship progresses. Touching is a huge factor in bringing attraction in a partner. Make her comfortable with casual approach.

Well, those are just a few suggestions for you if you’re trying to get out of the friends zone. Good luck!