Social awkwardness is a problem faced by a lot of people. It is the situation where our fears take control and we feel that if we start to socialize with someone, something we might say will turn into someone ridiculing us. Social awkwardness hence proves to be a real nuisance which causes people to eventually become anti-social, i.e. avoiding contact with everyone. Getting away from being socially awkward may seem tough to you until you realize that every single one of us have the same fears as you. Once you learn how to control the situation, you will be easily enjoying your interactions instead of fearing them. 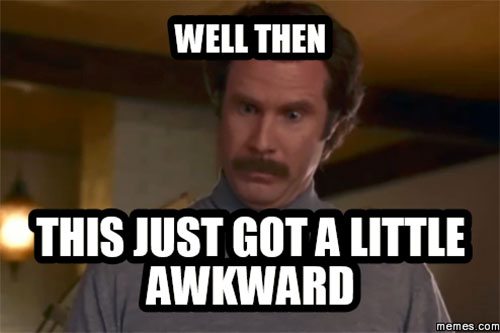 How To Fix Social Awkwardness

Social awkwardness can be fixed easily by following these simple tips I’ve covered below. If you think that this has absolutely nothing to do with dating, then you’re 100% wrong. It’s completely related and something that needs to be avoided at all costs if you want to get laid. In fact, you’ve got to get over this hump on your first date or you’re not getting laid for sure. Don’t blow it!

Change The Way You Think

As mentioned above, social awkwardness happens to everyone from time to time. So ,think about it as a general issue that not only you have to deal with but also everyone around you. You are not alone dealing with this ordeal. Once you start thinking that everyone suffers from this problem, you will be more open and accepting people knowing that they too have their fears.

One of the biggest reasons why people face social awkwardness is due to less confidence or low self-esteem. Stop thinking low about yourself. Referring to yourself as dirt is a bad idea. Don’t think of yourself as being useless because we all are useful in some manner to others. You probably have a lot to say to others so don’t be afraid to talk about your interests and hobbies. You are likely going to find someone who shares the same interests.

If you almost always think what the other person may think about you, it will cause you to stop and not interact at all. Try to remain calm and forget thinking about what other people think about you. Yes, there are some people who will think negatively, but this isn’t common. In fact, it’s quite rare. So go out and talk to someone regardless of their opinion about you.

If you aren’t the talkative kind, you can simply be social by listening to what other people have to say. Listening is also a social trait that many people have a tough time with. You can occasionally put your own opinion on the table, so don’t think you can’t . However,  if you can manage to listen to someone for a while, it will boost your confidence and self-esteem because you’ll know you are being useful to someone and that is more than enough.

If you plan on interacting with anyone that you meet on a local dating site then you absolutely have to get over this. If you can’t then you’re going to be in big trouble. It’s certainly going to have an impact on whether or not you get laid.