If you’ve never heard the term “ghosting” then consider yourself lucky. It’s a good sign that you haven’t had to deal with that type of situation just yet. If you’ve not had to deal with this type of thing, they honestly, you’re one in a million. I can count on my hands and feet all the people that I know who have had issues with meeting people and them ghosting them soon after.

If you feel completely in the dark on this topic, I’ll shed some light on it for you. The definition of ghosting couldn’t be any clearer. I’ll share my personal definition of the act, what you can do to prevent it from occurring and why knowing about it makes a difference. 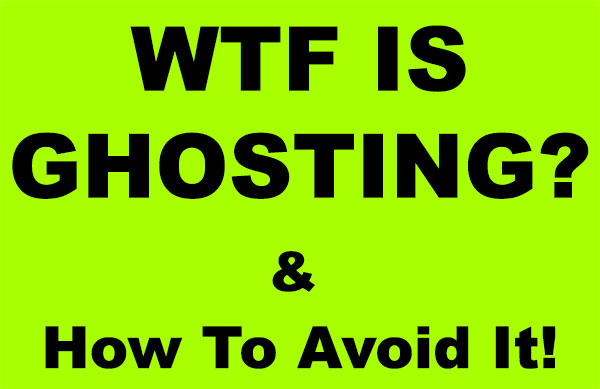 The Dating Definition of “Ghosting”

For those that like the dictionary, you want to know what the term means. That being the case, I’ll tell you. The act of ghosting is defined as follows…Ddating someone and fading away from them without any communication or giving them any indication that it’s about to occur. This type of thing can be abrupt and bothersome for those on the crappy end of the stick.

Getting ghosted typically means that you’ve done something in order to cause that to happen. From my experiences, I can tell you that the reasons typically fall under one of the following categories:

If you start asking the wrong questions (especially in an assumed casual relationship) then you’re eventually going to get ousted. That’s exactly how that works people! Asking the wrong questions or too many damn questions can really cause just about anyone to want to “ghost” you. This almost always plays out like this especially if you start kicking around terms like “serious” and “exclusive” or “where’s this going” so stay away from those terms when possible.

They Found Someone Better

When using casual dating networks like the one I use, there are times where the person you are dating just finds someone that they like better than you. Don’t get jealous, mad, or angry. That’s the nature and for all intents and purposes, the beauty of these types of sites! It happens and that’s life, the good news is that you’ve got people to reach out to within the network that might want to hook up with you.

Ghosting is very common when people start to get really annoyed with others. They cannot stand the fact that someone has completely taken over their phone and social life. Some people get annoying AF. It’s one of those things that becomes a brutal thing to have to deal with. That’s part of the reason why so many people just dip out!

If you want to avoid being ghosted, then you need to simply avoid doing all the things that I’ve just mentioned. Assuming that you can do that, then you’re golden and you might actually manage to keep hooking up. One thing that’s certain is that if you don’t join this, then you’ll likely never get laid regardless of how annoying you are.