The company behind xCheaters is none other than FH International Limited. They present a bunch of crazy stats and lots of photos to entice you to want to take action. By stats I mean they make mention that they’ve got 2,153,593 members and that there are 32,714 people online now.

The funny thing is that when I refreshed the page, the same numbers populated for me. That tells me that this is a bad site for sure. Don’t take my word for it just yet though. Instead, you’re better off reading my review to get the full rundown and 411 on this garbage. 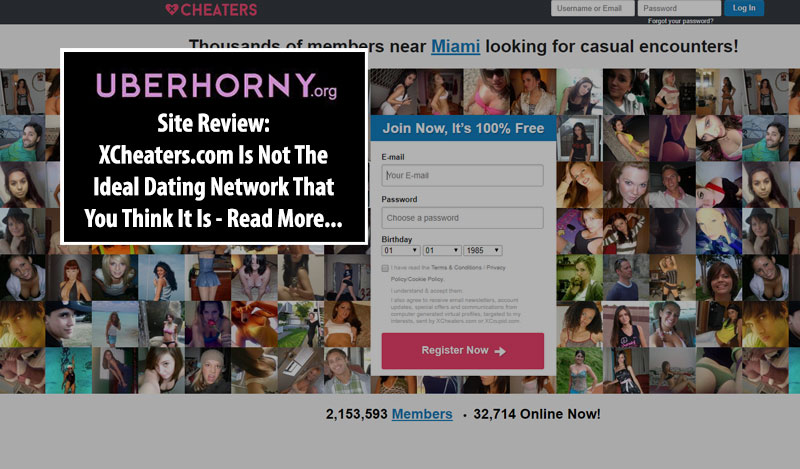 XCheaters Is A Scam – Read My Review To Learn More

Okay, so the first thing that you need to know about xcheaters.com is that it’s run by the same people that operate flirtlocal.com and flirthookup.com. The company behind this runs a TON of dating websites or marketing schemes I should say. This one right here is pretty bad too.

Why This Site Is NOT Worth Joining

Rather than spend hours writing a novel in a rant about XCheaters.com, I’ve decided to share some information with you that might help you make a good decision whether to join or run like the wind.

There are a few main reasons why I think this site is not worth joining.

#1 – They showcase a bunch of hot looking women in the member’s area and on the homepage. This tells me that they likely have fake or virtual profiles which they’ve been showcasing to get you to upgrade.

#2 – The amount of women that reach out to you even without a full profile built out is absurd. It’s as if these women are instantly attracted to you, which in my opinion is a bunch of hogwash. No way in hell is that the case.

#3 – Women instantly visit your profile the second that you join. The profile views from women come at you like a pack of wolves. It’s insane and unrealistic at best.

How They Rip People Off…

There are a few things that xcheaters.com does to rip users off. The first thing they do is run an automated script which sends fake messages and computer-generated actions to your profile. They do this through the use of fake profiles and virtual girls that do not exist. The website does not get in trouble for doing this because they explain all of it in their terms and conditions. Just check them out and you’ll know what I mean.

The emails start to fill your inbox shortly after. You begin to receive all these fake messages from phony girls created by the company. The emails are not from real women, so don’t start sending dick pics to anyone, please. It’s all a scam to get you to upgrade your membership and take action via your wallet.

The upgrade will eventually happen when you come across a girl that you think is amazing. This is when all the messaging stops and the girls disappear. That’s because most of the messaging and female interaction occurs between a consumer and a computer or a contract worker. The site does not deny this either. They are very upfront about these actions and for that, I must say they’ve got some pretty big balls.

If you’ve taken the time to join xcheaters.com, then my advice would be to cancel your membership. They’ve done their part to steal your money, now it’s time for you to get it back. Here’s how you do that.

First, shoot them an email asking for a refund. The information is provided below. In the event that you cannot do that, then my advice would be to call your bank and cancel the charge.

The company is based in the Channel Islands, so you’ll never reach them via snail mail, sorry.

Conclusion: Avoid XCheaters Or You Will Be Sorry

The XCheaters website is a bad idea. In fact, it’s perhaps the worst idea in the world and it does not work. The use of fake profiles aka virtual profiles is bothersome and quite frankly unacceptable.