If there’s one thing that I absolutely hate its Russian scams. This one that I’m about to uncover is what I consider the scummiest of them all. It involves Craigslist ads and redirects. I’ve covered everything that you need to know about this fake dating site. The Ontrackly domain seems to be connected to one of the major dating scams on the Internet. Just check out the review below to learn all about the scam. 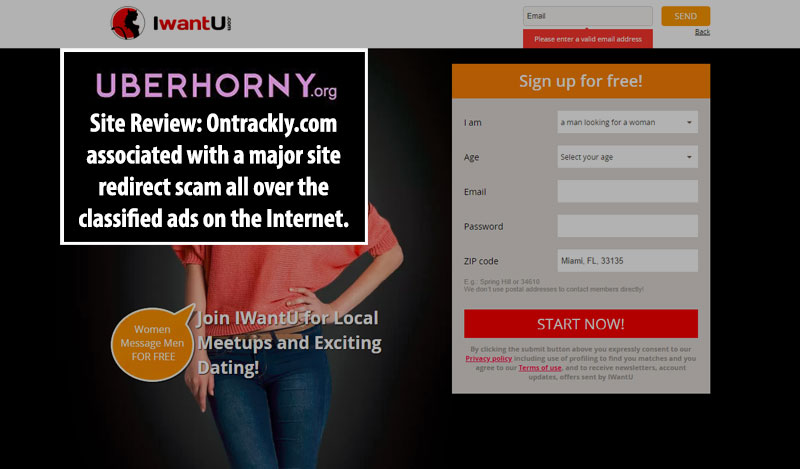 OnTrackly Is On Track To Rip You Off

Before I slap Ontrackly and the once associated site (iWantU.com) with the scam of the year award, here’s what I want you to know. Not all dating networks are created equal. Just because this scam exists, doesn’t mean that they are all scams. Keep an open mind with all of this.

OnTrackly is a run of the mill scam that you’ve probably seen all over the Internet. It works by luring you in with profiles and ads on other sites. I’m talking about Craigslist ads and other classified ads.

When you decide to respond to one of these, you’re going to get a link to the site rather than a real response. It should be noted that any time you try to respond to an ad or a profile and get a link somewhere else, you should immediately ignore it. Nothing good is going to come of it at all. It’s all just the first step of a scam at this point.

Non-Existent To Begin With

It turns out that the people who were sending you messages never existed in the first place. The site created all the profiles to trick you into giving them money. The pictures were taken from somewhere else and employees of the site filled out the information.

They only use them to send you enough messages to convince you that you need to upgrade your membership to respond to them. Once you do that, they’re going to stop. It’s that simple and it happens a whole lot. Lots of people fall prey to this sort of scam every single day.

Nothing that’s happening here is out of the ordinary. There’s no way to stop it because the companies tell you up front that they’re out to scam you. They are not actually breaking the law because they disclose this to you in the TOS.

If you look at the terms of service, you’ll see that they admit to using fake profiles to talk to you. They’re allowed to do this because they’re not selling you a dating site. They’re selling you the fantasy of talking to women. That’s all that there is to it. By agreeing to that, you’re on the hook and you’ll have no recourse once you figure out what’s really going on.

Conclusion: OnTrackly.com And Any Associated Sites Are Bad

OnTrackly is a hard pass. It has nothing at all to offer anyone. No one should be using this site and even fewer people should know that it exists. The second you find yourself getting a response with a link in it, you should delete it immediately. Nothing good is going to happen. You’re simply going to be on track to get scammed like so many other people before. The Internet can be a scary place, but as long as you learn to see the warning signs, you’ll be able to keep yourself safe. If you want a no BS dating site, then read this specific page and take action.