I typically don’t write on this topic but I’ve had so many conversations with people this week on how to get your ex girlfriend back that I just had to share it with you. Has your girlfriend recently broke up with you? If so, then good! You should start by immediately joining a dating site to try and find someone to bang regardless of whether or not you want to get back together with her. Just do it. Anyway, breaking up can be really hard for the both of you but it doesn’t mean that it is the end of a relationship. If she broke up with you, there has to be a reason behind it. Hopefully, the reason wasn’t that you sucked in bed! 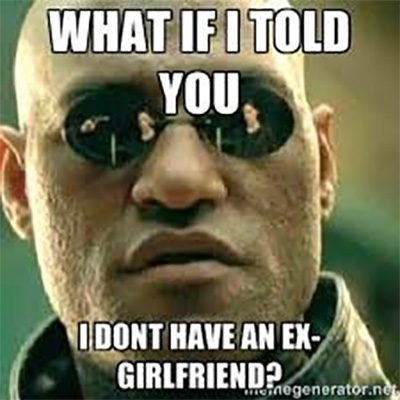 If you really want her back in your life again, you must understand and determine why she broke up with you in the first place. Getting your ex girlfriend back isn’t impossible. It requires a few steps and compromises but in the end, you can always get her back if you are serious. Following are some of the best things to do after a break up to get her back again. Remember what I said though about hooking up online. I’d suggest trying to find a girl to fuck in the interim!

Give Her Some Space

When you break up with your ex girlfriend, try not to act like you desperately need her back in your life. Instead, get into a complete no contact zone for a couple of days. During the no contact period, make sure you do not get in touch with her no matter what happens. If she contacts you, do your best to ignore it.

This no contact period is for two reasons. One, she will start forgetting about the negative picture you set which made her split up with you in the first place and secondly, she will get enough time to think about the two of you once again. Hopefully, she’ll be thinking about how awesome the sex was!

The no contact period should be at least 7-10 days because that is the bare minimum time when she finally gets rid of all the negative thoughts but still has the good memories intact.

During this time, if she tries to contact you, do not answer her messages or texts. You will have to disappear completely and make her wonder what happened to you.

Return As The New You

During the no contact period, focus on the negative parts of your personality and start improving them. For example, if there is a particular habit your girlfriend didn’t like, change that. You have to improve on the negative points to finally have something to offer her and get her back.

During this period try to grieve as much as you can and then go out and have fun. If you return to your girlfriend in the same miserable condition you left, things aren’t going to turn out good. It’s just a cyclic cycle that you’ll be creating.

Return as a better person and show her that you are happy but do remind her of the good times you had together. If you nail this perfectly, she will come back to you in no time. I also suggest that you dress like a boss and make sure she notices that you’re threads are top notch. If she doesn’t, then that’s okay too. That’s why I suggested that you use the dating sites that exist out there and try your best to get laid as often as possible in your downtime. Remember, you’re not the only single person trying to get over someone. There’s plenty of girls out there on horny dating sites that are looking to fuck! Go find them and do it!

If you’re freshly single and you’re still not over your last significant other then fear not because I’ve got some great tips to help you get over them, move on and start hooking up again.

Find A New Booty Call
The first suggestion that I always give people when they’ve recently broken up with someone is to jump right back into the water. Notice I didn’t say pool? That’s right. I’m suggesting that you not attempt to find a significant other, but instead attempt to find an uberhorny local or someone that’s looking for a one night stand. That’s the first thing you need to do to get your mind off of them. Sign up here if you’re not a member of any casual dating site and get things started right away.

Disconnect From Them
You need to remove yourself from your ex or at least attempt to get rid of most things associated with them that exist in your life. That means, stop hanging at bars and clubs your ex frequently visits. Also, delete the pics and their cell phone number as well. Hanging on to that will do you no good whatsoever. If they want you back they’ll find you.

Focus on You
Stop focusing on things for other people and start focusing on you. That means hitting the gym, starting a diet, going to events you want to and doing things you’ve been wanting to do. You’re finally able to do literally anything you want with no strings attached. Freedom has been given and it’s up to you to take full advantage of it!

Socialize
If you’re cooped up in your house alone every night, you better at least be chatting with someone on your hookup site. If not, you get your butt out there in the real world ans start socializing!

Do these four simple things and I guarantee you’ll eventually find the solution of how to get over someone and before you know it, you’ve gotten laid and you’re over them!

Now go get laid tonight or at least this weekend. It’s Friday and it’s time to party!